Fearless energy drink from the stable of Rite Foods Limited has made full preparation to support this year’s Fanfaro Autofest event as the headline sponsor. This, is in its bid to make the platform bigger and thrilling for car drifters, super bikers, and fun seekers in the ancient city of Ibadan from Friday, 2nd to Sunday, 4th December, 2022.

The Managing Director and Chief Executive Officer, Fanfaro Oil Nigeria, Mr. Adekunle Olanrewaju, stated that the support from the Fearless energy drink is enormous hence the event is credited to it and dubbed “Fanfaro Autofest, Fearless Edition,” as the contestants will be rejuvenated with the brand’s positive energy and courageous spirit to actively showcase their talent in car drifting.

“It takes a lot for someone to align with your dream; it takes like minds to be part of it. The previous events have been successful, but now having the marketing leading; Fearless brand behind it, is a success even before the start of the event.  The brand, also resonates with what the sport stands for, we are fearless, tough, energetic, and want to make it more exhilarating,” Olanrewaju explained.

He pointed out that with the Fearless brand behind the largest motorsport in the country, Nigerians should expect more exciting and action-packed sporting activities, as the product has been with Fanfaro from the planning stage to the exercise which takes a year to put together, and also for a refreshing moment with the trailblazer in the energy drink segment.

According to him, a Fearless brand raffle draw will be organised before the main event in November, where participants would be told to make a creative design with five empty bottles of the product, with the winners going home with exciting gifts.

Commenting on the sponsorship, Rite Foods Head of Marketing, Olumide Aruleba, affirmed that the Fearless brand is very proud to throw its weight behind the sport, as it will bring into it the positive energy associated with the brand as a means to create the desired impact and make it a ground-breaking event. “We also want everyone to look forward to it,” he stated.

On her part, the Assistant Brand Manager of Fearless Energy Drink, Kanyisola Sangowawa, said the support from the product signpost is its connection with consumers in keeping them refreshed by providing the vigour needed while attaining their dreams or showcasing useful talents. She avowed, that it takes a fearless spirit to support an action like the auto fest, which requires boldness, daring force, and strength in making it a success.

In his remark, the Fearless Brand Ambassador and the Face of Fanfaro Autofest, the Fearless Edition, Tobi Bakre, actor and a lead cast in the movie, Brotherhood, extolled the partnership between the Fearless energy drink and the motorsport, stating that both connects with a Fearless and reinvigorating force. 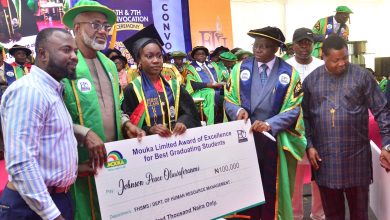